The Folk Art of Karakalpaks became the object of scientific study due to the comprehensive research work of the prominent scholars such as S.P.Tolstov, N.A.Baskakov, A.L.Melkov, T.A.Zhdanko, A.S.Morozova, and others. Before that few people knew about the Karakalpak Folk Art and fragmentary information concerning it in the press was not reliable.
It became possible to know more about the original Karakalpak Folk Art when the first collections of their items were formed, initially in the Karakalpak branch of the Uzbek Academy of Sciences in 1959, and later, in the State Museum of Art named after I.V.Savitskiy. Nowadays, these collections are considered to be the most complete of their kind. 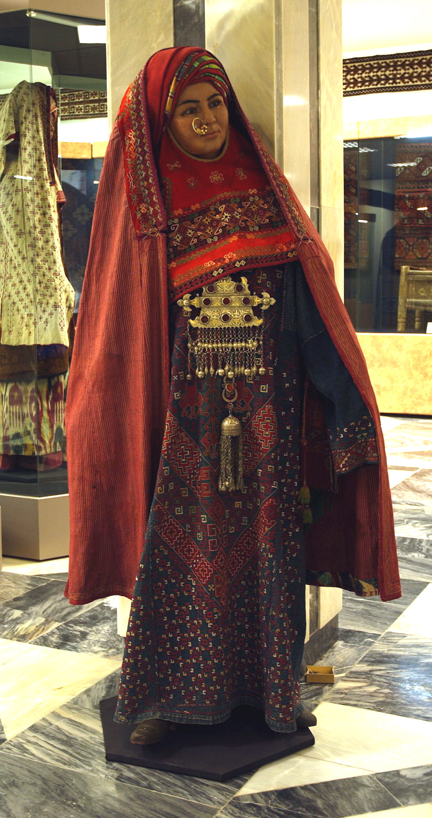 Till the 20th century Karakalpaks had only the folk applied art, especially such kinds of it like pile rugs, flat weaves, embroidery, appliqué work, jewellery, metal work, printed and stitched leather, carved and inlaid wood, hand-made textiles. Approximately all kinds of Karakalpak folk art can be used in a modern interior and to match its decoration organically. But among them the most popular are pile rugs whose weavers as if to leave their time behind and became able to solve the problems which excite the modern artists. The producers used traditional ornamental composition, but at the same time they varied colours and their shades preserving intact the common colour range of the rug. This method made the rug to be very close to the painting.
The small pile rugs often had a relief pattern were the background was deeper than the pattern itself. The large carpets were rarely woven.
A yurt furnishing and a national costume were the major kinds of the Karakalpak folk art. 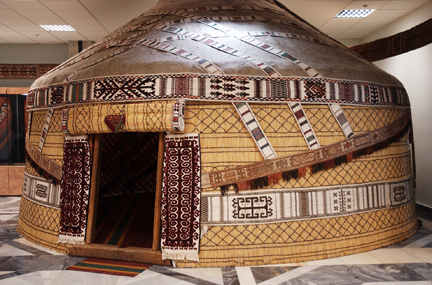 While a set of the Karakalpak costume had a strict colour range, the yurt furnishing also avoided bright colours and large decorative surfaces. The weaving was done using pile and flat weaving techniques in soft colours that combined browns and dark reds with delicate touches of blue, green and orange, creating an astonishingly harmonious rhythm. In the twilights of the yurts interior the people in their national costumes successfully stood out against the background of its decoration and blended with it.
The major role in the yurt furnishing belonged to relief and flat weaves. The designed bands were always woven using cotton warp, but relief woven pile bands had usually wool weft, while flat woven ones-silk, wool and cotton wefts.
Woven bands, especially small ones, were made thoroughly and affected by their refinement, clearness and harmony of work. They had different sizes: from the 16 meters long bands to the small rugs. Embroidery was used mainly for decorating the costumes of young girls, brides and old women. These three kinds of the female costume were of special importance. They symbolized purity of youth, strength of a new mature life and wisdom of an old age. Each of them had their own colours which were complemented by a strict traditional set of jewellery. A dark blue colour of a dress softened by a crimson embroidery with touches of white and yellow, a red  stitched robe with thin stripes, and gold of the gumis-takhya and tobelik head-dresses, silver of numerous jewellery-all of them created the colourful image of the maidens beauty.
The same dark blue dress and others were included in the bride’s costume, complemented by the head-dresses-kiymeshek and saukele as well as by a mantle jipek-jegde and a set of jewellery. 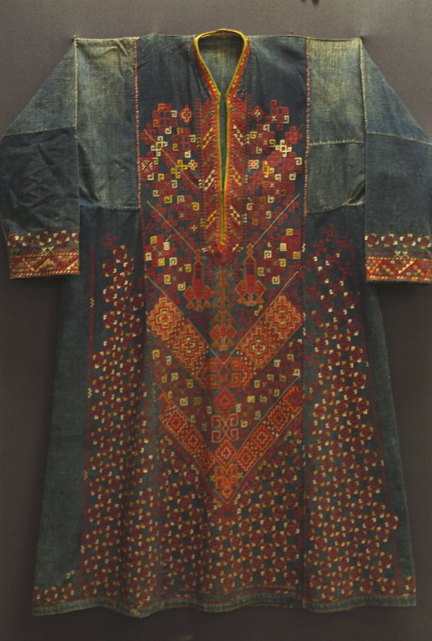 The particular solemnity was reached by combination of red and black cloth of the kiymeshek, crimson silk of the robe, dark blue embroidered dress, gold, silver, turquoise and carnelians of saukele and jewellery. The costume of an old woman was of light colour, made of cotton fabric and consisted of the white dress- ak koylek, head-dress-ak kiymeshek and robe-ak jegde. They were covered with a  fine red embroidery in half-cross stitch. 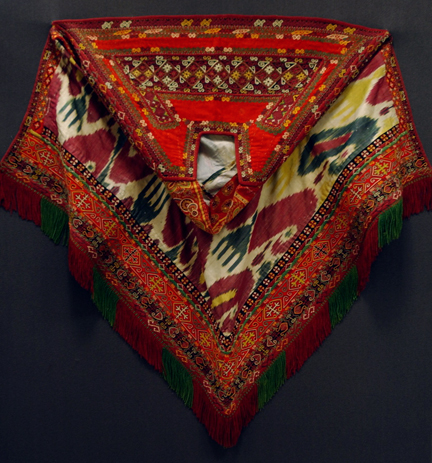 The Karakalpak embroidery has many ornamental motifs. But even within the limits of traditional motifs the artisans could reveal their creative and individual characters.
Jewellery was made mostly for girls and brides. The women wore much less jewellery after a birth of the first child, and so did the old Karakalpak women. The artisans also produced amulets for children, plates for men’s belts and a rich horse harness.
The jewellery items were mainly made of silver combined with cornelian. They were slightly gilded to stress the pattern. Sometimes they were decorated with turquoise and pink coral. 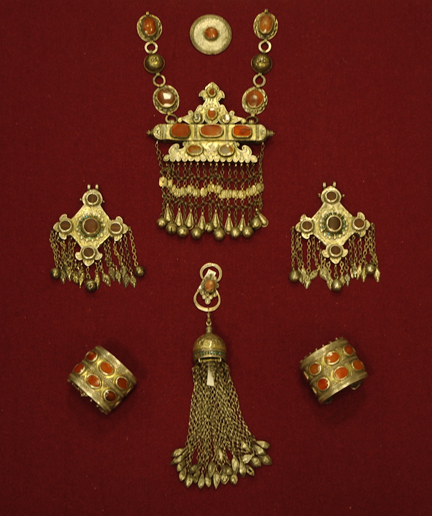 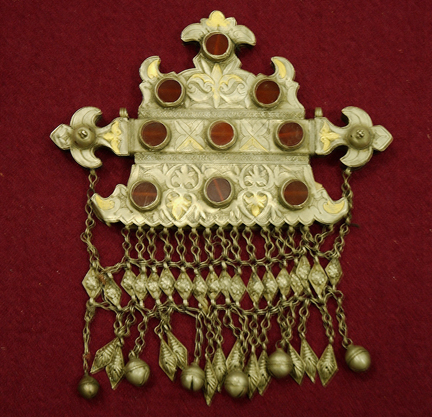 The girl’s head-dress gumis-takhya, tobelik and wedding head-dress saukele were richly gilded. Gumis takhya and tobelik consist of figured plates, covered by chasing and is decorated with high casing including green turquoise and pink coral. The pink coral is prominent in the saukele and in combination with the figured plates in the form of sheep heads, and lines of high casing makes a unique ornamental and original pattern. 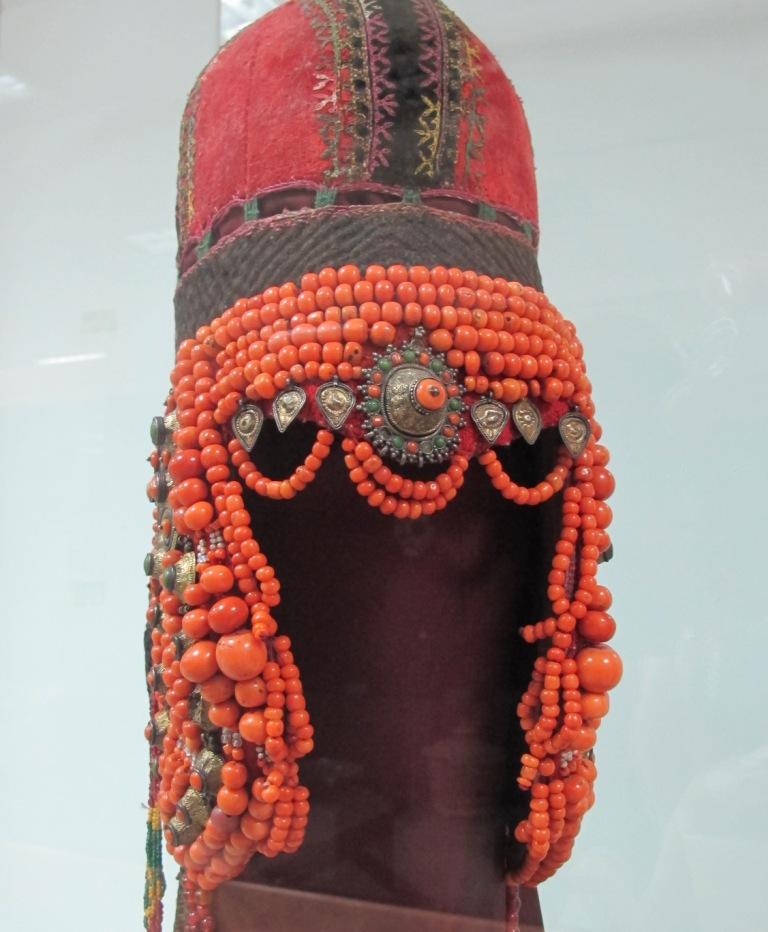 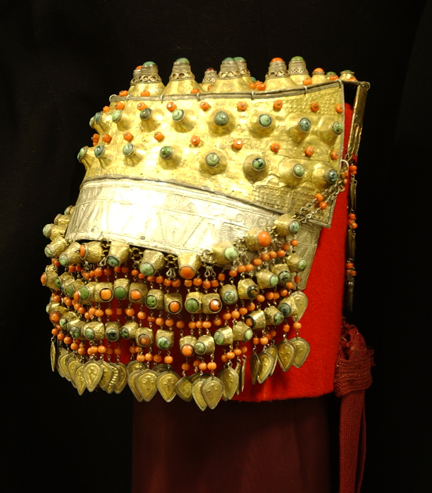 The tobelik is equally original in its form, a high gilded tiara with the top turned towards the front, and a skull-cup-gumis takhya. All these kinds of Karakalpak folk art are very traditional and testify to the links with ancient art.
Appliqué work was usually used in making shanash - a long trapezium-shaped bag made of leather and used for keeping flour, cereals and millet. The artisans also used for making bags a black and white cloth. The ornament was geometrical or horn-shaped one. Printed leather had an expressive effect in the tebengi-the insulation plates for preventing stirrups to touch the body of horse. They were printed in the forms or engraved and stamped. 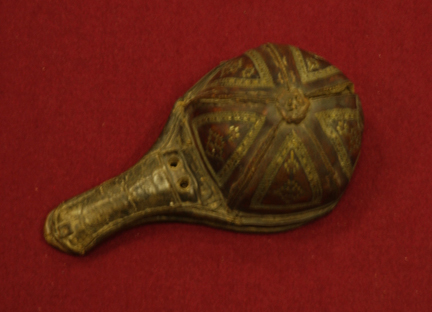 Embroidery on leather was done by male masters, jipek jona- under saddle was embroidered with silk threads, shinikab – case for tea-cups and tea pot was sewn with copper wires and thin copper strings.
Carved and inlaid wood was widely used in the yurt doors ergenek, in small trunks, chests and stands for meal-sandyk and sabayak. Producing inlaid wood, the artisans used a red cloth and bone which made articles more festive and colourful. Bone was covered with geometrical engraving, while wood was painted in dark brown and black colours. Kitchen utensils- bowls, cups were formerly made of wood. Carved wood had one side design, as the items should be lightweight and portable in accordance with frequent resettlement.
Painting on wood came into use in the late 19th early 20th centuries and their depicted figurative objects organically blend with the ornament, receiving its flatness and decorative character.