The Karakalpak State Art Museum named after I.V.Savitskiy is acknowledged by experts and world mass-media to contain one of the top art collections in Central Asia. Now the museum is well-known. The English newspaper “The Guardian” called the museum “one of the most outstanding museums of the world”; (Amelia Gentleman, “Savitsky’s secret Hoard. “The Guardian”; January  1, 2001). Now the museum collection includes about 90 thousand items.

The story of how the museum was established and developed is as unique as the collection. The museum is a treasury that illustrates cultural periods from the third century BC to the present day. There are items of the material and artistic culture of Ancient Khorezm, including the Folk and Applied Art of the Karakalpaks, a small, formerly semi-nomadic ethnic group with a primordial history and original culture. The Fine Arts section of the museum is represented with the contemporary art of Uzbekistan and Russian Avant-garde of the 1920-30ies of the XX century.

The founder of the museum – I.V. Savitskiy –first visited Karakalpakstan in 1950 to participate in the Khorezm Archaeological & Ethnographic Expedition as a painter. From the first days after staying here he was greatly fascinated by local unusual nature, people, history and art. Igor Vitalievich collecting the items of Folk and Applied art noted that this art is going swiftly disappeared.  It had occurred to him to establish a museum - museum of Folk and Applied Art.  Savitskiy often compared Karakalpak embroidery to the paintings of the Western European Impressionists; “……Matisse.  It already I have in the embroideries of kyzyl kiymeshek. Vrubel…that’s the colour of akbaskur”.  Igor  Vitalievich began a struggle for “the great art“. At last in 1966 the art museum was opened and he became its first director. 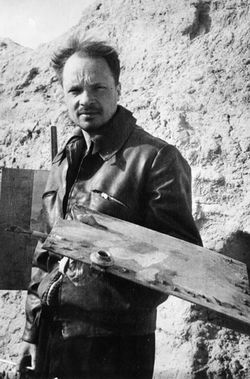 Igor Vitaleivich Savitskiy was born on August 4, 1915 in Kiev. From his childhood took a great interest in drawing. In the early 1920 the Savitskiy family moved to Moscow.  Young Igor received private tuition from the artists. In 1930ies he studied first in the Institute   of Polygraphy, then in the Art School.  Before the World War II  he entered the Art Institute named after Surikov where he took lessons from celebrated artists R.Falk. N.Ulyanov, K.Istomin. He was able to escape the war because of his ill health. In 1942 he was evacuated with the Institute to Samarkand.  Thus happened his first acquaintance with Central Asia had an influence to his further life. He worked in the Khorezm Archeological & Ethnographic Expedition, and later at the Karakalpak branch of the Academy of Sciences of Uzbekistan.  Soon he noticed that the Folk and Applied Art of Karakalpak people is going disappeared the collection of which he was greatly interested in. Savitsky  made a great deal to save and preserve more examples of this art. He travelled all over Karakalpakstan and assembled collection of jewels, traditional costumes, yurt furnishings and etc.  Besides he actively was occupied with paintings. He was fascinated by peculiar nature of Karakalpakstan with its unpretentious colour.  Untiringly produced landscapes. In his paintings were imprinted not only splendid nature of Karakalpakstan but also magnificent monuments  of the Ancient and Middle Ages “Koy kirilgan kala”, “Toprak-kala”, “Ayaz-kala”. There are landscapes reflecting the places swiftly growing Nukus city (“Public park by Cabinet of Ministers”, “Elm trees”).  In spite of their small sizes his landscapes were epic and specifically monumental, saturated with (rich) sunlight, one can feel the joy of life. There are also Savitsky’s  early paintings here “Still-life with Venus ” and “Still-life with mandolin”.  The soft tonality of the paintings dimmed with silvery black bluish ochreous colours. 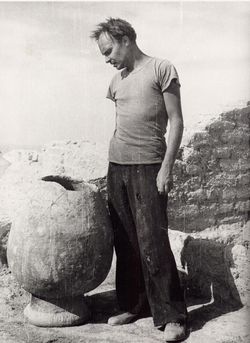 After opening of the museum on February, 1966 Savitskiy completely dedicated his life to the filling up the museum collection. Since that time he began collecting the paintings not only famous artists but also the art works of unknown and unrecognized painters of the time. For a very short time he could assemble the unique collection that made his name all over the world. Now is called the second largest collection of Russian avant-garde in the world after the Russian Museum in St. Petersburg.   For the rest of his life he searched and found new masterpieces for his museum.  Shortly before his death he assembled the collection in Moscow that contained two carriages of artwork to send to Nukus.  Since 1984 the museum was given the name of the founder.

The selfless work of I.V.Savitskiy was appreciated by the Government of Uzbekistan. In 2002 he was posthumously awarded with the order of the Republic of Uzbekistan “For the Distinguished Public Services”. 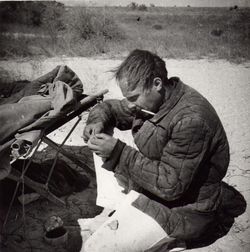 Savitskiy always dreamed to let not only the local visitors to see the museum but also the art lovers all over the world. Now his dream came true.

After the independence of Uzbekistan was proclaimed, our museum became like Mecca for art lovers all over the world, from Europe and CIS, USA, Australia and etc.  The exhibitions with the best art works from museum collections were held in many countries including Russia, Germany, France, Italy, Holland, USA, and Australia.  The club of the “Friends of Nukus Museum” was organized and it is still functioning, the members of which are the authoritative people from different states.

The leading world mass media devoted and until now devote their best articles to our museum. The museum was included in the touristic route of the “Golden Ring of Khorezm” organized with UNESCO. It is recognized one of the most visited museums of Uzbekistan and in 2011 it was awarded with the Diploma “The museum is worthy of tourists’ attention” for its active attraction of tourists to our Republic.