On May 29, the museum opened the exhibition «Socialist Realism in Fine Arts» (from the collection of the State Museum of Arts of the Republic of Karakalpakstan named by I. V. Savitsky).

The aim and objective of the exhibition are to display the works from the museum, which haven’t been exhibited before; familiarization of residents and guests of the republic with the artistic direction in art, which was called "socialist realism"; aesthetic education, raising the level of education and culture of the population; upbringing the youth in the spirit of love and respect for the motherland.
For many years, the exhibition activity of the Savitsky Museum focused on avant-garde art. This was due to the fact that since the 1980s there was a great interest in the avant-garde of the 1920s and 30s, which was persecuted, attacked and even banned during the long years of the Soviet era and was literally rescued by the founder of the museum, Igor Savitsky.
But I.V. Savitsky acquired for the museum not only works of avant-garde artists. The Nukus collection included a considerable number of such canvases, which corresponded to the conjuncture and were painted in the spirit recognized by official Soviet circles.
Today we present paintings and sculptures of Uzbek and Russian artists, made in the style called "socialist realism". For the first time in the halls of the museum exhibited paintings, which for many years have been kept in the funds. Displayed works were made in the Soviet era, from the late 1930s to the 1970s.
What does socialist realism method require? First of all historical concreteness, accurate reflection of life in beautiful artistic forms. However, the reader might wonder whether such features of social realism methods as truthful reflection of life, historical accuracy were typical for old realism art; weather they are new and first appeared in socialist realism art.
Of course socialist realism can not be separated from the previous realism art, there is succession between them. Realism artists of the past accurately reproduced life, seeking to show it in progress. But the method of socialist realism declares that accuracy and historical concreteness of an artistic reproduction of reality must be   combined with the problem of the adaptation of ideals and upbringing in socialistic spirit.
A new type of a positive hero, a creator, an active fighter for the improvement of social life, is typical for socialist realism art. A civil pathos of an artist and communistic partisanship of his creation are expressed in passionate statement of the new and beautiful, in angry denial of the old, anachronistic.
The main topics, developed in «socialist realism»: 1) heroic past – in the painting by V. Rojdestvenskiy «Burning village» 2) the development of Societ community – construction work, industrialization, soviet  agriculture in the paintings by O. K. Tatevosyan «Construction of Kattakurgan water reservoir», A. A. Morgunov «Dneprostroy», K. I. Finogenov «Staliningrad tractor factory» etc.; new lifestyle of new people is demonstrated in the artworks by N. S. Kozochkin «In the rest house of mother and child», A. N. Shevchenko «Physical training lesson», «Demonstration on May 1» etc.
Moreover, other important subjects, which must be touched upon by socialist realism artists, are demonstrated at the exhibition as well: 4) formation of a Soviet man – the portraits of famous people, ordinary people, ordinary people, as typical representatives of Soviet period; 5) leading and ruling role of the communistic party; 6) army theme -the struggle against enemy’s weapons.

The exhibition «Socialist Realism in Fine Arts» will be on view untill November 10. 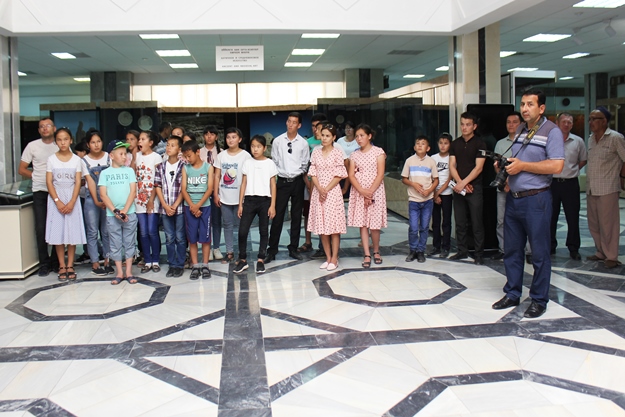 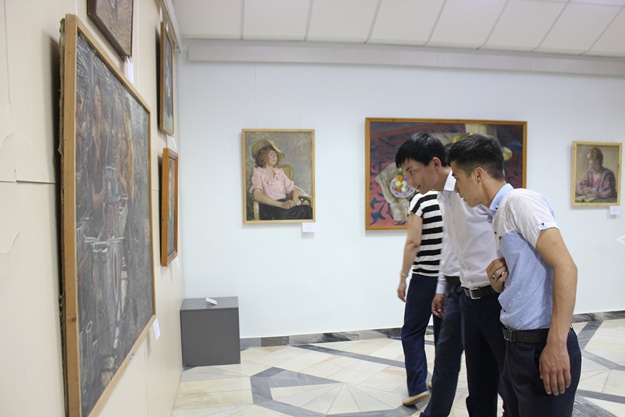 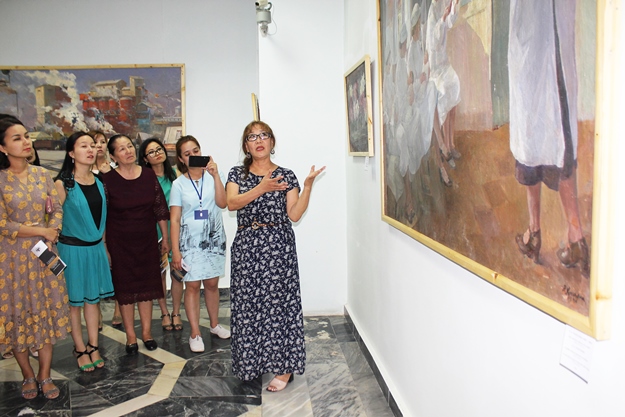 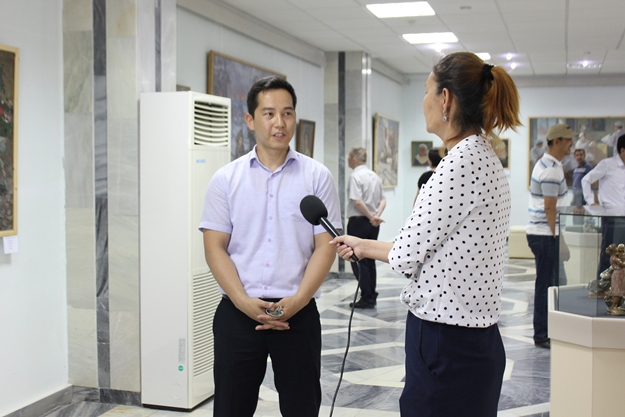