Korovay spent her childhood in Harbin where her father was a chief of the railway station and her mother was an actress. In 1914-1917, she studied in St.Petersburg in the Art Promotion School under K.Rerikh and I.Naumov. In 1917, she moved to her parent’s home in Barnaul, where she joined the left-leaning group of artists that were searching for and introducing new forms of art (M.Kurzin, V.Gulyaev, and later V.Markova). She worked as a teacher at the school - studio of the department of Altay Art Studios. In 1920-1923, she studied at VKHUTEMAS (Higher Art Technical Studios). She travelled a great deal around the country. In the 1920s, she settled down in Central Asia, initially in Tashkent, then in Samarkand. She worked as an artist at theatres and at the Samarkand. “Fine Arts Factory”. She wrote and designed books for children: “A Frog and a Milk”, “Two Brothers”, “Kindergarten”. Participated in establishing the Samarkand department of the Union of Artists. In 1946, upon invitation from V.Favorsky, she moved to Moscow, where initially she worked at the factory producing toys. In the 1950s, she helped Favorsky work on a mosaic panel for the building of the Soviet Embassy in Warsaw (1955). In the late 1950s, she returned to easel painting. In 1969, she joined MOSKH (Moscow Society of Soviet Artists). Her works “In the former Ghetto, Bukhara” and “Dyers” are part of Korovay’s cycle of works dedicated to the Bukharian Jews. 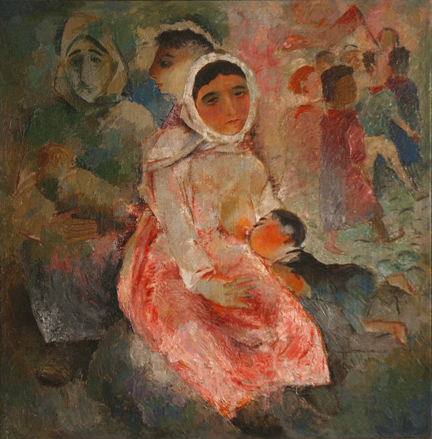 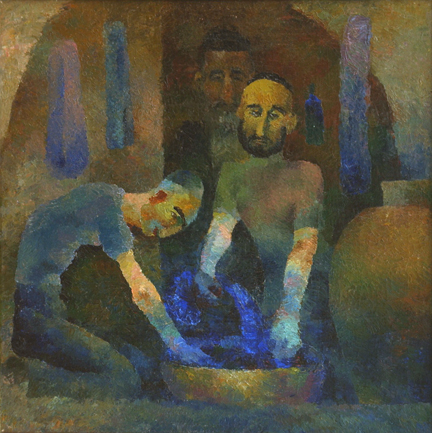