Graduated from secondary school in Velizh in the Smolensk province, then entered the Vocational School of Art and Industry in Leningrad (1925-1929). There she was trained in monumental painting in Kuznetsov’s studio. After her marriage to Admiral Nikolayev, she moved to Moscow. Studied at the Institute of Advanced Training of Artists (1934-1938) and L.Kramarenko’s studio. In 1938 Admiral Nikolayev was executed for parricide and Borovaya (surname of her second husband, her maiden name was Terentyeva) was arrested and sent to the Temnikov camp where she spent seven years. During imprisonment, she was visited by her friend Vera Milyutina who secretly spirited out her pictures describing life in the camp. Parts of the camp series are in the museum collection. 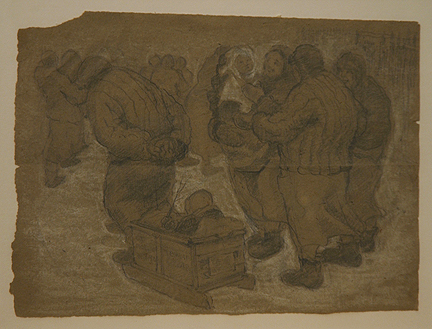