He was a son of a woodcarver. Studied in the Moscow School of Painting,Sculpture and Architecture (1908-1913), under A.Vasnetsov, A.Arkhipov, K.Korovin, V.Serov. Lived in Moscow till 1915 and again in 1922-1925, and in Central Asia in 1915-1921, where he did his military service (1915-1917); later he moved to Italy (1926 onwards). Participated in exhibitions as of 1908. While in Central Asia, he painted numerous views of Tashkent and Samarkand and copied the ornamental designs of unique architectural monuments in Bukhara, Samarkand and Tashkent. He also set up and illustrated the journal “Young Inhabitant of Turkestan”, and worked as a teacher at the Turkestan Regional Public Art School in Tashkent (1918-1921). His students, among others, included N.Karakhan, M.Kupriyanov, S.Chuykov. In 1926, he went for medical treatment to Italy. During the Second World War, he was an active participant of the resistance movement in Rome. 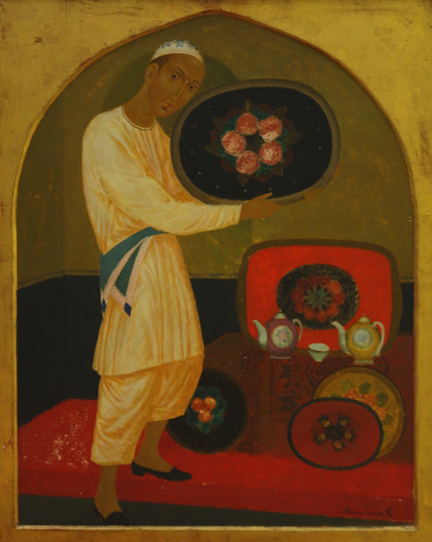