Mazel obtained his degree in arts in the School of Arts of Ieguda Pen in Vitebsk which Chagal also attended. To continue his education, in 1907 Mazel entered the Art Promotion School in St.Petersburg headed by N.Rerikh. In 1910-1914, he studied in the Academy of Arts and private studios of Munich. With some friends he travelled across Italy. When the war broke out in 1914, he returned to Russia and in 1915 was conscripted into the army. His military unit was sent to Turkmenia, Krasnovodsk and Ashgabad and he would spend his leave time sketching and studying Turkmenia, and its customs and traditions. At that time, he created a number of water-colour albums: “Patterns of a Persian city”, “Valley Tales”, “Carpet Tales”. With the artists N.Vladychuk and M.Libakov, he established an art studio in Ashgabad in 1922, named “Avant-Garde Art School of the Orient” out of which grew the Turkmen Fine Arts. In 1923, due to aggravated health Mazel had to leave his beloved Turkmenia and return to Moscow. In Moscow the artist worked in the publishing houses “Moscow”, “Red Novelty”, “Rainbow”, etc., designed the books of R.Kipling and I.Erenburg. In 1934, Mazel entered the Moscow Central Museum of Ethnography. In 1937 and 1940 Mazel participated in the museum expeditions to Turkmenia and Karakalpakia. The Nukus museum comprises a great many works by Mazel from sketches to completed works of art which demonstrate the principle of monography used by Savitskiy in creating the collection 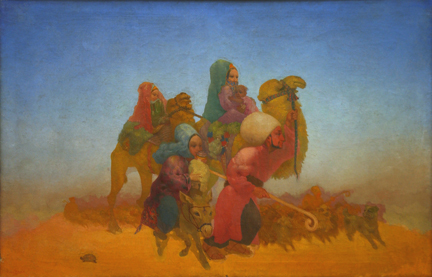 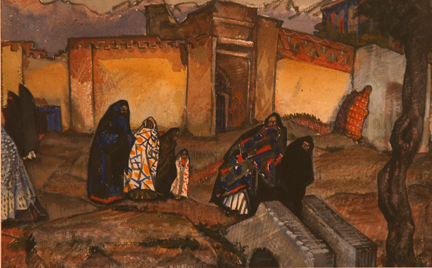