He received his primary education in the Eletsk Parish School (1887). This year his parents moved to Moscow, where he entered the icon-painting studio (1887-1889). Then he took classes in painting from V.Meshkov (1888-1889). Studied at the Moscow School of Painting, Sculpture and Architecture under N.Ghe, N.Nevrev, I.Pryanishnikov and V.Serov (1889-1900). After graduating, he worked as an assistant to V. Serov in the Free Studio of the School (1900-1903). Worked as a teacher at the art studio of E.Zvantseva (1901-1907) and during these years he got to know Tolstoy, Chekhov, Diaghilev and Stanislavskiy, as well as the artists from the “World of Art”. Along with producing paintings and graphic works, he decorated plays in Stanislavskiy and Meyerhold’s theatre-studio and in the Moscow Art Theatre. Became acquainted with the artists from the “Golden Fleece” journal and “Blue Rose” association, such as P.Kuznetsov, K.Sapunov, M.Saryan and S.Sudeykin. A trip across Italy (1907) and long stay in France and Germany (1909-1912) provided him with an excellent opportunity to study European art. In 1914 Ulyanov conscripted to the military service but soon afterwards released because of his ill health. He worked as a teacher of drawing at the Stroganov Art School (1915-1918), at the VKHUTEMAS and at the Fine Arts Department of the Prechistenskiy Practical Institute (1919-1921). Participated in activity of the artists’s association “Four Arts” (1925). In 1942-1944, Ulyanov was sent to Transcaucasia (Nalchik, Tbilisi), then to Samarkand, where he worked as a professor at the evacuated Moscow Surikov Institute of Art. 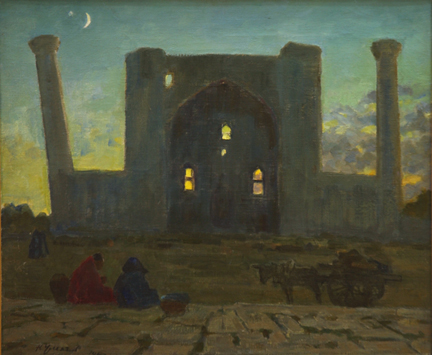