Igor Vitalyevich Savitskiy collector, founder of the Museum of Art, a person with incredibly wide range of interests was also a leading artist of Karakalpakstan. In 1946 he graduated from the Surikov Art Institute in Moscow. In 1950 he came to Karakalpakstan as a member of the Khorezm archaeological and ethnographic expedition of the Academy of Sciences of the USSR. The expedition was headed by a well-known scholar S.P.Tolstov. Savitskiy discovered for himself an applied Karakalpak folk art. His passion for this kind of art was a main reason that caused him to leave Moscow for Nukus forever. Savitskiy learned painting from the famous Russian artists R.Falk, N.Ulyanov and K.Istomin. As a landscape artist, he discovered the richness of the natural scenery in Karakalpakstan. Most of his paintings were made outdoors. They depict in a precise and picturesque way the peculiar charm of Karakalpak nature. Savitskiy has no superfluous elements in his paintings. The obvious lyricism, sincerity and love for nature captivate his audience. A born colourist, he could easily have relied mainly on colour for effect but chose not to. For him the issues of pleine air, light and colour were inseparably linked with an acute perception of the beauty of nature like no other. Savitskiy was awarded the title of Honoured Art Worker of the Soviet Socialist Republic of Uzbekistan, People’s Artist of the Autonomous Soviet Socialist Republic of Karakalpakstan and laureate of the Republican Prize of Berdakh. In 2002, Savitskiy was awarded (posthumously) the Order of “Buyuk Khizmatlari Uchun”(For Distinguished Services). 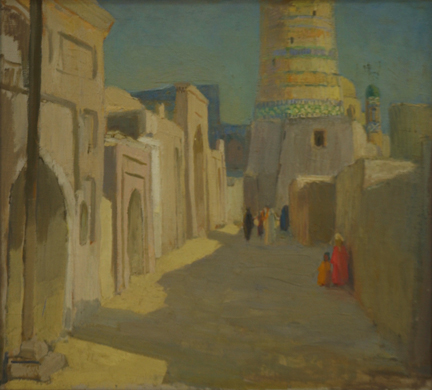