Before 1917, he studied at the Voronezh gymnasia, then went on his education at the United Labour School. In 1919-1920, he studied at the Voronezh Free Art Studios under S.Romanovich and N.Maksimov.He participated in decoration of revolutionary celebrations. In 1922-1930, he studied in VKHUTEMAS- VKHUTEIN (Higher Art Technical Studios-Higher Art Technical Institute), where he studied under P.Konchalovskiy, I.Rabinovich and V.Sakhnovskiy. While a student and over the subsequent five years, Shyukin decorated parades, the mass staged processions devoted to celebrating revolutionary dates and events. Painting and graphic papers were produced by the artist with straight forward simplicity associated with children and folk masters. He was able to produce greatly varying works almost simultaneously. But his perception of life and conveyance of his impressions testified that the artist was a dreamer and fantast. Image - metaphors, public shows, grotesque and lyricism formed the basis of Shyukin’s creative activity. In 1935, Shyukin contracted tuberculosis and died. 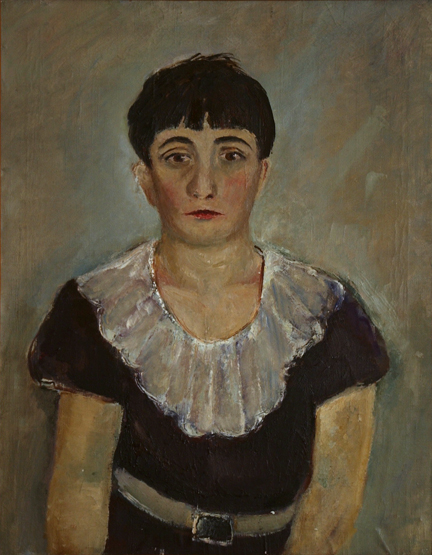 Girl in a dress with a white collar. Oil on canvas. 70x55